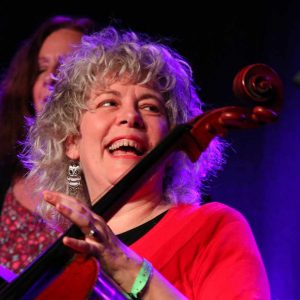 At 22, after four years of a successful, but soulless career in the city, Kathryn walked away with no idea of what would come next. It was at this point that she found the cello and formed an instant connection with its physicality and the sounds she could make as a beginner. Sounds that are still part of her musical vocabulary.

As a teenager Kathryn took part in group lessons, but showed no aptitude for the cello or for classical music; it bypassed her heart. It was only when she used the instrument to express, rather than play correctly, that the connection was made. Then the cello took over her life and Kathryn recognised that she needed to be a musician. She made a decision not to have lessons, but to allow her own voice to emerge, even if it meant not being a good player. However, learning through experimentation, not education, led to unexpected results.

Kathryn Locke’s performing life began as a duo with Jude Abbott (Chumbawamba), both singing and playing. Busking and doing floor spots at folk clubs and festivals led to bookings, then to being asked to join a string of bands. Each one required something different, each one enabled her to learn something new. And so, her musical life took off. Kathryn has worked with an enormous range of outfits and individuals, including: The Chainsaw Sisters, The Mellstock Band and Peggy Seeger. Her relationship with Jo Freya has spanned Kathryn’s career. They have worked together as a duo, in the band Scarp, playing Kathryn’s music for contemporary dance and now with Chodompa Music.

The techniques Kathryn developed were inspired by watching musicians playing other instruments: guitarists, percussionists, fiddle players and traditional musicians from around the world…but never cellists. Kathryn watched how their hands and bodies moved when they did something she really liked. By replicating these movements on the cello and improvising with them, new sounds and techniques emerged and her vocabulary developed. Writing music followed on from there.

“…and then there’s cellist Kathryn Locke, whose inspired playing is simply breathtaking. Haunting and percussive, like nothing you’ve ever heard before”. Lancashire Telegraph

Kathryn’s first commission as a composer was “Straight Jacket” for the National Dance Company of Wales, a solo suite performed on stage with the dancers. It toured for two years, including in Europe and Asia. The success of Straight Jacket led to further commissions from dance companies and choreographers, in theatre and in film. Playing for dance is Kathryn’s great love, whether that’s with a contemporary dance company, the exuberant ceilidh band “Token Women”, or electronic duo Lamb.

Kathryn’s career was riding high, when out of the blue she was struck by a neurological condition that left her unable to speak. Her career came to an enforced, abrupt stop. Recovery was only possible if she gave up her professional life completely. Bur she never stopped playing.

Meditation proved to be the key to Kathryn’s recovery. She went regularly to Samye Ling Tibetan Centre in Scotland to study and learn. There they introduced a Saturday night music session in their café and Kathryn was taken back to her roots. For the first time in years, she was able to play music with and for other people and rediscover the joy of it. Her health continued to improve and opportunities to perform solo at Samye Ling’s events and celebrations followed, as did her return to writing. Kathryn recognised that she had to be a musician again.

Through her relationship with Samye Ling, Kathryn found a connection with HH the 17th Karmapa, the head of the Kagyu lineage of Tibetan Buddhism. After listening to some of her music, he gave permission for Kathryn to create a piece using his voice; his singing was then recorded especially for it. It was the most daunting writing challenge of her career. There were no clues as to how to proceed or how to make the most of the extraordinary gift of freedom that was on offer. But slowly, colours and a shape emerged, and “When the Heart Roars” unfolded into a piece that demanded everything that Kathryn had to give.

The seeds of Chodompa Music were sown after a chance meeting with Sarah Allen, who had played on Kathryn’s favourite dance commission (The Enigma of Sin, for Ricochet Dance Company). She realised how much she wanted to play with and write for Sarah again and so, together with Geoff Coombs, they began to work on the ideas Kathryn was having and to create new pieces. When Jo May and Jo Freya joined them, the band was able to develop its full personality. Meanwhile, Kathryn had fully recovered and was ready to record with the band.

“I felt a deep rumbling in my chest as the voice of the cello spoke directly to my heart and breath and being. Her music has a raw but knowing quality that is like no other I have heard. If you ever wanted evidence that music can dance, listen to “La”. Charlotte Darbyshire (director of Candoco Dance Company)

The release of Chodompa Music’s first album, “La”, is a celebration of the energy of recovery, the joy of making music and freedom in having a voice.